50 Years of Bringing People Together

In its early years the Park District offered a few summer events and programs including day camp, tennis lessons, softball and swimming at the Manor Motel’s pool, which the district leased.

In the mid-1970s, the Park District acquired approximately 120 acres of the Scarcelli Farm east of Interstate 55 on Canal Road. The result, Community Park, remains the Park District’s largest park.

Before obtaining its own program facilities, the Park District utilized many local partnerships including Channahon School District 17 gymnasiums for indoor activities.

The Park District’s long-sought plans for an aquatic facility and a golf course were realized in 1993, with the opening of Tomahawk Aquatic Center and Heritage Bluffs Public Golf Club. The Bluffs was quickly recognized as one of the top public golf facilities in the nation and has garnered numerous awards throughout its 28 years.

Playing a lead role in community partnerships has continued to help the Park District grow and expand services to the community. The most significant has been the development of Heritage Crossing Field House with Channahon School District 17 in 2003. Constructed with Channahon Junior High School, the facility has been a model for intergovernmental cooperation in facility development and use.

Another more recent partnership with the Channahon Township brought Sengo Adventure Garden to the community in 2019, the first inclusive playground in the area. The adventure garden was named to recognize the area’s Potawatomi heritage, Sengo is the Potawatomi word for red squirrel.

The Channahon Park District looks forward to continuing to fulfill its mission of bringing people together through the numerous parks and facilities it maintains, and a variety of programs and activities it plans for all ages throughout the year.

Check back often for updates on activities, events, specials, and more throughout 2021! 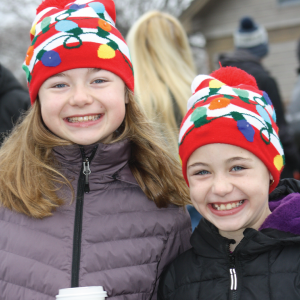 Brought to you by the Village of Channahon, Channahon Park District and Three Rivers Public Library District.

Kick off the winter season with the Channahon Park District, Village of Channahon, and Three Rivers Library to celebrate all things winter! Play a game of Winter Bingo, decorate a cookie with way too many sprinkles, grab a hot chocolate, stroll the luminary walk, enjoy a carriage ride, make a holiday craft, stuff your pockets at the candy cane scramble, and enjoy performances from local student groups. Finish the evening off with the lighting of Channahon’s holiday tree!